Cheers all round for Yorkshire Air Ambulance

Home/News/Cheers all round for Yorkshire Air Ambulance
Previous Next

Cheers all round for Yorkshire Air Ambulance

It was cheers all round at a recent beer and banger festival that raised thousands of pounds for Yorkshire Air Ambulance – we’re proud to say that one of our staff members was a part of it!

Nigel Bailey, Ravenheat’s group accountant, has been helping out with the annual festival, which is now in its ninth year and run by the Eldwick Village Society near Bradford in West Yorkshire.

He has been a committee member since the society’s inception 40 years ago, and enabled us to sponsor a barrel of beer at this year’s event to help raise more money for the cause.

The community enjoyed clinking their beer glasses while trying local craft beers and ciders at the festival, which was topped off with barbecued hot dogs for everyone.

The society aims to raise £6,000 for the Yorkshire Air Ambulance each year through the festival – that’s how much it costs to keep one ambulance maintained and in the air for one day.

The Eldwick Village Society has raised an amazing £30,000 for the Air Ambulance to date. Here’s a big thank you to Nigel and everyone at the Society for all their worthwhile charity fundraisers over the years. Cheers! 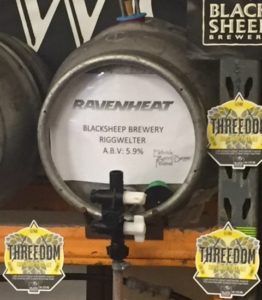 About the Author: Matthew Longford

General Manager - Matthew has been a member of the Ravenheat team for the past 11 years. He’s responsible for keeping an eye on sales, decision making and ensuring the office runs smoothly from day to day.

This site uses cookies: Find out more. Ok, thank you
Go to Top